Geeks Computer Tech - 09.47
WHY GOOGLE NEED GOOGLE PLUS .
Google had to do something. After all it couldn't simply watch as Facebook became the default social home of the connected individual. So it first tried to ride a new (Google) Wave but others just didn't find it surf-worthy. Then it tried to create a new Buzz but managed just a jarring note with exposed contact list of Gmail users.
Suddenly, Google didn't seem the invincible force it once was. Earlier the tech pundits raised a toast to anything and everything Google did or launched; Wave, Buzz and what not. And how silly their predictions turned out!
So when Google unveiled the top-secret Google Plus project, most of us were skeptical, while others were cautious but all were curious. After all there had to be some logic to all those +1 buttons popping all over the web-o-sphere. I mean I just couldn't figure out why would someone plus 1 a page or site or blog when they could just Like it?
Google Plus solves this puzzle. 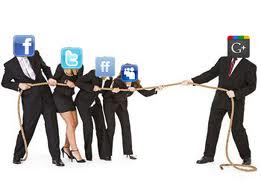 The Real Reason Behind Google Plus

As the name suggests, Plus is the extension of the searching individual. Come to think of it, Google stands for search and Plus for Social. Google dominates search but is almost completely missing in our social world where Facebook dominates. It is to find out about our likes, dislikes, contacts, interests that Google Plus was born
But why does Google need our social data?
To complement and supplement its advertising business. Right now it has amazing loads of info on people's search habits and preferences and provides its publishers on the Adsense platform accurate search based information to get the most bang for their buck.
But the arrival and dominance of Facebook has altered online advertising forever. Facebook offers features and insights to its ad publishers that Google simply cannot offer, like:
For these reasons Google needs social data more than ever. The advertising pie is now distributed between more players and advertisers are no longer willing to put all their eggs in the Adsense basket but want to diversify. Facebook ads has also opened another avenue for low cost advertising instead of shelling out $20+ for highly competitive search terms.
No wonder Google craves social info so much that in spite of failed past attempts with Buzz and Orkut it rolled the Plus die. But did have another choice?
Diposting oleh Abdullah Syafii
09.47
Abdullah Syafii di 09.47 Facts, Google +, Helpful tricks for internet, Updates
Terimakasih telah membaca : Google +(plus) review. Silahkan masukan email anda dibawah ini! dan anda akan otomatis mendapatkan kiriman artikel terbaru dari Geeks Computer Tech. Terimakasih.