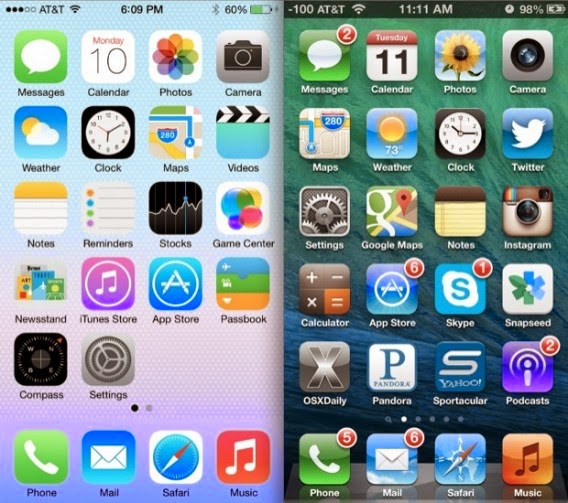 It's been a year since Apple introduced iOS7 to the world by calling it as a “stunning new user interface”. Since that the world started thinking it as one of the biggest updates in the realm of mobile operating systems. Indeed, its simple, beautiful design, feel instantly familiar, which creates a useful and enjoyable experience to its users. While iOS7 bought a huge change in the asetheticity of iOS, it was more or less a rehashed version of the previous installments, with just a few added features. On the other hand, iOS8 emerges as an important and massive overhaul in the way Apple released its previous OS versions.

Apples's next release iOS8 has come up with many new features and upgradations that users will certainly appreciate. To give a better idea of both of the operating systems, we are presenting you a comparison review of iOS7 and iOS8 to help Apple fans to decide which one they would like to have or whether they should upgrade their device to the new OS version.

When Apple launched iOS7, people were more concerned about the way Apple has created its UI and visuals which was “flatter”, brighter, more colorful and strickingly different from iOS6. But, if we talk about iOS8, frankly speaking, it has borrowed its visual interface from iOS7, except from a few subtle variations. The UI of iOS8 is flat just like iOS7, and Apple fans who are more concernd about the looks might find it disappointing. On the other hand, those who are planning to upgrade from iOS6 to 7 might find it exciting as they will have an entirely new interface.

So, as of now you got to know that Apple hasn't changed the visuals of iOS8 and its still the “flat” design just like iOS7. So, if visuals are the same then what are changes that Apple has brought to its users? Obviously, its the core features that remain the focal point while designing iOS8. Continuity is one the most noticeable functions that the latest release will support. Now, you must be thinking what this continuity means? It's actually a set of features that help you to stay seamlessly connected with your other Apple devices.

The example of this is the new Handoff feature, which enables the user to continue with their textual or phone conversations side by side of your other Apple devices. Means, now you can go on with your conversations even if your switch between your devices. Handoff will show you a link, once you've connected both of the devices, so that you can carry forward your conversation. So, if you are talking on the phone and suddenly realise the need of your Mac, what you all need is just simply carry forward the conversation.

Another striking feature with which every iPhone App Developer must be awara that Apple has introduced to its OS software. In the past, many users complaint about the limited keyboard options as the previous versions only supported the default type keyboard. However, in iOS8, Apple has finally give an opportunity to install a third-party software such as Swiftkey or Swype on their devices. In iOS7 it featured a native Quicktype keyboard and it lacks some advanced features if we compare it with the latest version. Plus, it also does not provide developers with a facility to access API like iOS8

One of the biggest and most hyped features of iOS8 is its wealth of health and fitness apps. iOS8 is purely dedicated to fitness fanatics to help them better keep a firm track of their personal and fitness data. The Health umbrella app offers a wide range of possibilities to to monitor, track, record, and analyse the fitness schedules accross a variety of levels. Although, Health app was too available in iOS7, the new additions made in iOS8 making it more popular and garnering an impressive fan base worldwide.

iOS8 comes up with a host of innovative camera and album features which makes it truly stand out as compare to the previous versions. The camera not only gives sharp and clear appeal, but include several rich features such as time-lapse video, independent exposure, focus controls and many more.

Apple takes the notifications to a new level in iOS8, by making it all the more interactive and user-oriented than iOS7. The updates enable the users to directly interact with the apps through the notification screen. You can do voice messages, answer to your Facebook messages or Whatsapp and a lot more.

So, there we have it, a list of few but significant features of both of the operating systems. The differences between both of them are actually not “differences” but are just few more improvements here and there to make it more impressive for the user. Now, you question yourself which one you would like to have. The answer depends on how you look and percieve of the features.